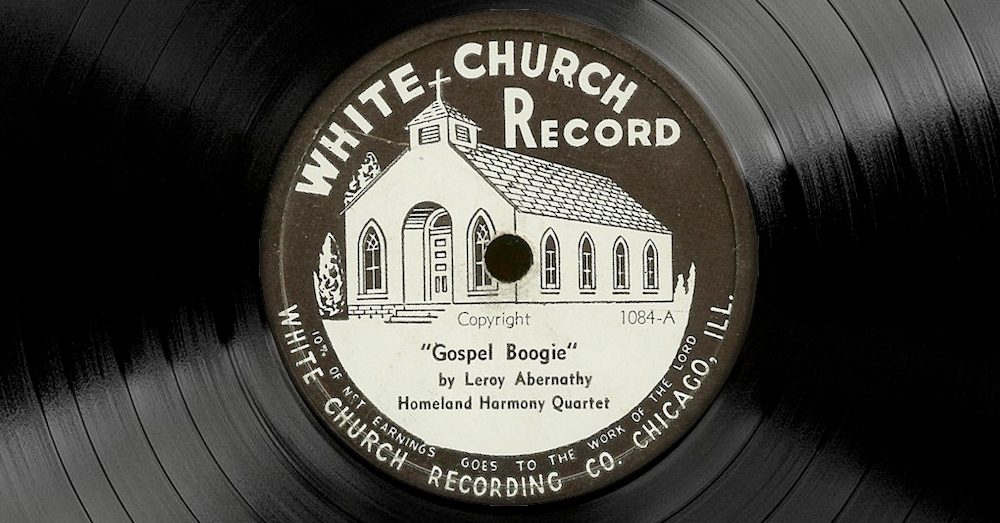 In 1947, a white Southern musical entrepreneur named Lee Roy Abernathy made a move that shook up churchgoing America – and the sound of popular music. That winter, the Georgia-born pianist and songwriter went into an Atlanta studio with his group the Homeland Harmony Quartet to record his latest composition, “Gospel Boogie.” Abernathy was a musical entrepreneur, selling sheet music for his compositions at fifty cents a pop, and he kept his ears open to the hottest trends among the both the pious and the profane. “Gospel Boogie” is all about the wonder of heaven, as is made clear by its alternate title, “Everybody’s Gonna Have a Wonderful Time Up There.” But it’s full of earthly pleasures: a propulsive piano line evocative of Chicago keyboard masters like Albert Ammons, busy harmonies that anticipate doo wop, and a distinct twang that makes a connection to country barn-burners like the Delmore Brothers’ 1946 stomper “Freight Train Boogie”. From the dreamy falsetto that wafts through the background to the spoken word verses that almost sound like an early version of rap, “Gospel Boogie” is a mind-boggling example of mid-century popular musical elements colliding within one song.

Even Abernathy’s decision to shout out the secular world via the song’s title had a direct precedent: Sister Rosetta Tharpe, a guitar-playing dynamo who’d grown up in a traveling evangelical troupe and gained fame jazzing up gospel songs with Lucky Millinder’s Cotton Club quartet, had released Thomas A. Dorsey’s hymn “Hide Me In Thy Bosom” under the more enticing title “Rock Me” in 1938.

“Gospel Boogie” upset some pious listeners – the Homeland Harmony Quartet found that they were not welcome to perform it at some of the churches where they regularly toured, and Abernathy found himself defending the song against angry letter writers by calling it an attempt to perform ministry in “places where no ministers go,” like “juke jives.” Joy tends to overwhelm such misgivings, however, even in the service of the Lord, and the song was just too fun to be stopped by a moral crusade. Its sold upward of 200,000 copies upon release, becoming the first national charting hit for a white gospel quartet and setting the tone for much popular music to follow, including the religious recordings of rock and roll’s favorite church-going boy, Elvis Presley.

What’s most intriguing about “Gospel Boogie,” however, is not the Homeland Harmony Quartet’s recording itself but what immediately followed its release: a deluge of cover versions that illuminate the vital, complex ongoing dialogue between sacred and secular music at the very moment when rock and roll began to emerge. First out of the gate was a countrified take by Wally Fowler and the Oak Ridge Quartet, a group that later claimed a place in country music history as the Oak Ridge Boys. This version relies heavily on a keening harmonica, making that Delmore Brothers connection. In their version, early television personality Red Foley and his Log Cabin Boys played up the song’s intriguing use of spoken word, bouncing through those rap-like verses with a light touch that recalls the jump and jive of Louis Jordan. Almost simultaneously, Rosetta Tharpe released her own take, based around a guitar solo that beautifully marries country to blues. Wrapping up the month in which the original was released, the Pilgrim Travelers laid claim to the song, infusing it with the elegance and swing of the black quartets who had inspired Abernathy in the first place.

This is what gospel music is all about: the connection, cast in a sacred light, between heaven and earth, black and white, tradition and modernity. Today, many music lovers not steeped in the gospel tradition may think of it as a somewhat antiquated element of popular music, important during the Golden Age when Mahalia Jackson toured the world’s concert halls and peaking during the Civil Rights movement, when it served as the soundtrack to both triumph and mourning. In the secular world, gospel seems to have been reduced to mere color – African-American color, to be blunt – in today’s pop spectacles: the choir that stands behind a pop star during an awards show performance of the whooping melisma that every television singing show contestant tries to show off. And among believers, the classic sound of gospel now can seem old-fashioned, superseded by hip hop choirs or the folk-rock singalongs of praise and worship liturgies.

Without gospel music, however, there never would have been an Elvis Presley. There never would have been a Ray Charles, or a James Brown. From the mid-twentieth century on, gospel music not only thrived within a separate sphere as vital as the jazz, rock and rhythm and blues worlds; it also constantly intersected with the secular music industry, providing models that countless artists outside the church emulated. “The Gospel Roots of Rock and Soul,” and ongoing series from WXPN and World Café, explores these connections as a way of reinstituting gospel’s central place within the history of American popular music.

Grounded in the African-American modes of musical expression that lay at the very foundation of this country’s popular music, gospel music itself is more eclectic and adventurous than those unfamiliar with its history may realize. Deeply grounded within African practices that survived and adapted after the Middle Passage, this religious tradition also evolved as a way for people becoming African-Americans to thrive within a multicultural, white-dominated society. As Christians, African-American worshipers learned the hymns Europeans had imported and the folk songs whose provenance slips between that continent and Africa and remains impossible to trace. Soon, their musical expressions intersected with what was happening in ballrooms, bars and concert halls as soon as those kinds of establishments were built. And white worshipers, absorbing the sounds and physical moves of the black worshipers who sometimes shared their very church buildings, also changed their musical approaches because of these encounters.

After the Civil War, the business of American religious music emerged, eventually developing into what we commonly think of as gospel music now. Through the pioneering work of the Fisk Jubilee Singers, of enslavement and emancipation known as spirituals became central to the common definition of American religious music. But it was in the early 20th century that gospel emerged as its own industry, practice and art form. Gospel was the daylight face of the blues, the Sunday dress of country music. Always returning to those roots in African musical ideas, gospel developed as its own realm of expression, ever tied to the theology and moral codes of the Christian church. It also became a major force within popular music in general, a direct source for every style that developed from the birth of jazz to the triumph of soul.

“The Gospel Roots of Rock and Soul” reaches back to that mid-century moment of glory when Rosetta Tharpe was filling stadiums, Mahalia Jackson sang for presidents and kings, and the rocking gospel quartets taught rock’s first heartthrobs how to moan and move. Over the year we’ll present a live concert series including performances that showcase the gospel sounds of groups like The Fairfield 4, The Dixie Hummingbirds, the Fisk Jubilee Singers, The McCrary Sisters, and sacred steel gospel sounds of The Campbell Brothers. We’ll be visiting local churches in Philadelphia and we’ll premiere a new documentary, How They Got Over, about the gospel quartet sound and its specific influence on rock and soul. The year will wind up with an in depth radio documentary about the music; the songs, the songwriters and the performers.

Our coverage will extend from the days when the Reverend Herbert W. Brewster drove a flatbed truck around Memphis, Tennessee, bringing gospel music into the streets where R&B greats like Rufus Thomas (as well as a young Elvis Presley) witnessed their power, to the present day. It highlights central figures from Al Green to Aretha Franklin to CeCe Winans and Kirk Franklin, and examines how gospel has permeated popular music from classic rock to hip hop.

Through exciting performances, dynamic radio programs and searching investigations on the Web, “The Gospel Roots of Rock and Soul” shows how gospel helped create American popular music – and was created by it – and how it remains relevant today. Today, gospel music is still as ever-present within popular music as it was when “Gospel Boogie” defined a moment. Its spirit remains vital and ever moving, present whenever American music reaches for the sky.

Ann Powers is NPR Music’s critic and correspondent. She writes for NPR’s music news blog, The Record, can be heard on NPR’s newsmagazines, and covers the Nashville music scene for the nationally syndicated World Cafe. Powers is the author of Good Booty: Love and Sex, Black and White, Body and Soul in American Music .