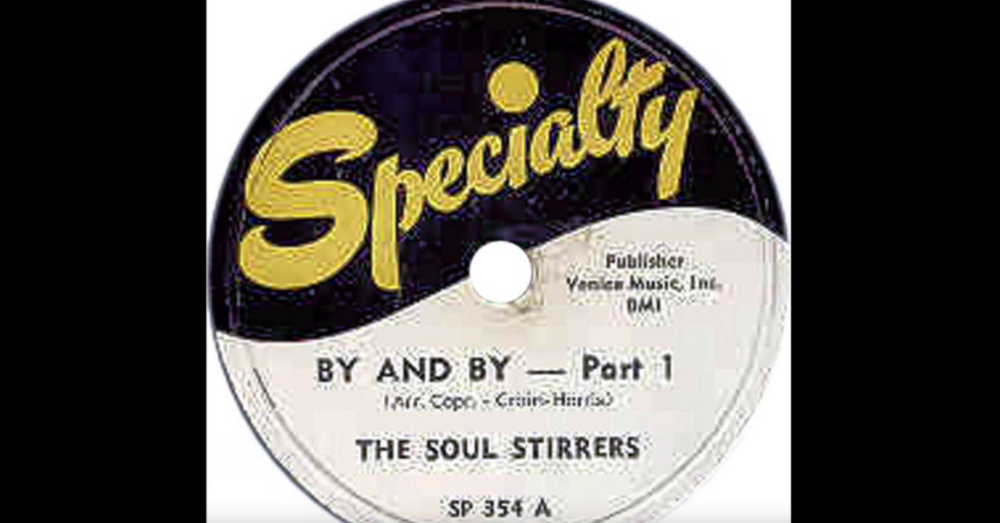 The Soul Stirrers and the Rock of Salvation By Robert M. Marovich

The Waldorf-Astoria Hotel in Manhattan was flush with rock and roll royalty. Mick Jagger and Keith Richards mingled with Stevie Wonder and producer Phil Spector. Gazing around the ballroom that January evening in 1989, one could lock eyes with Bruce Springsteen, Atlantic Records chairman Ahmet Ertegun, and Dion “Runaround Sue” DiMucci.

Writing for Rolling Stone, David Fricke and Sheila Rogers called the evening “the Academy Awards ceremony, a rock & roll summit meeting and a Friars Club roast all rolled into one.”

The event was the fourth annual induction ceremony of the Rock & Roll Hall of Fame and Museum. The Rolling Stones, Stevie Wonder, Phil Spector, and Dion were among the newest class of inductees.

On the surface, it might seem improbable that representatives of one of the African American church’s most successful quartets would be feted for their contributions to rock and roll. Wasn’t rock and roll panned by pulpit-pounding preachers as the product of the devil? One didn’t mix God and Satan and expect any good to come of it. But plenty of good did come of it. Where would R&B and, by extension, rock and roll be without the pioneering vocal techniques of Harris, Crain, and their fellow Soul Stirrers?

It has been said that the Stirrers’ induction into the Rock and Roll Hall of Fame was all but guaranteed because they gave rock and soul music two extraordinary singers: Sam Cooke and Johnny Taylor. But the Soul Stirrers contributed to rock and roll in other ways. The Hall of Fame itself proclaimed that the Soul Stirrers brought gospel from a mighty long way, “from its jubilant style to a more rhythmic, emotional incarnation, providing the blueprint for doo-wop and R&B in the process.”

Certainly the Stirrers weren’t the only group, or even the first, to yank quartet singing from its roots in close-harmony jubilee singing and inject into it a “rhythmic, emotional incarnation,” but they were among the most popular. On their 1939 single, “Walk Around,” lead singer (and the song’s composer) Harris demonstrated his already keen sense of vocal dynamics by intensifying melodic passages and interjecting hiccups of falsetto while the group chanted “walk around” with metronomic precision. Gospel singer Clara “Georgia Peach” Hudmon improvised like Harris on 1946’s “Here Am I, Lord, Send Me.” The Harmonaires quartet supported her with Soul Stirrers-like metronomic chanting, but instead of singing “walk around,” they sang “do Lord.”

Not a big leap from do Lord to doo wop. Supporting a lead singer with syllabic chants and blow harmonies became de rigueur for vocal harmony groups from the Orioles and the Harptones to the Chantels and the Temptations.

“A musical history of the Soul Stirrers is also a condensed survey of the gospel quartet tradition,” Anthony Heilbut wrote in The Gospel Sound. One need look no further for confirmation of this than the group’s 1950 release for Specialty Records, “By and By.” Based on Charles A. Tindley’s gospel hymn, “We’ll Understand it Better By and By,” the Specialty recording is five and a half minutes of aural history on how the Soul Stirrers, inspired by quartets from Jefferson County, Alabama, incorporated a demonstrative preacher-style vocal delivery into the otherwise staid harmony popularized by the Fisk University Jubilee Quartette.

When “By and By” was released, future rock and rollers didn’t need to enter or even peer in the windows of an African American church to hear gospel music. It was as close as the radio and record store. Mass media made gospel music available to all races, religions, classes, and destinations. Nor was gospel music confined to the United States. During the 1950s and 1960s, gospel records made their way to Europe, Scandinavia, and Australia. Touring Europe, gospel artists were met by the same enthusiastic crowds that cheered American blues and jazz artists.

Pops Harris departed the Soul Stirrers shortly after the release of “By and By.” In scrambling to replace him, the Stirrers innovated again by selecting as the group’s new face and voice a twenty-year-old Sam Cooke. With matinee idol good looks, an easygoing charm, a warm smile, and a silky vocal delivery that could melt the polar ice cap, Cooke gave the veteran quartet a youthful, self-assured makeover. And if women were taken with Harris and Foster, they were beside themselves with Cooke. In ways that Jagger and Richards understood and gospel artists admitted behind closed doors, the Soul Stirrers had a lead singer with sex appeal—as intoxicating a combination of the sacred and secular as allowable in church circles.

Cooke and the Soul Stirrers became the quartet to emulate. But if quartet singing was advancing, its musical accompaniment remained mired in the prewar a cappella tradition or, at best, given a rhythmic assist from a drum beat or rhythm guitar. In a 1955 recording session, the Soul Stirrers again tested the outer limits of quartet experimentation by adding organ and piano. The plan was to incorporate the multi-instrumental dynamism used successfully by gospel groups like the Caravans, the Ward Singers, and the Alex Bradford Singers. But by adding electric guitar, drums, and keys, the Stirrers were also appropriating the small R&B combo sound. This mid-1950s restructuring, when combined with fervent singing and a drum backbeat, fired one of the first shots of the rock and roll revolution.

But to fully appreciate the Soul Stirrers was to experience them live. Unshackled by the time limitations of radio and records, the group dug deep into its font of vocal expressivity to eke every ounce of utility from a song. Ladies fell out. Men spoke in tongues. Here again, it’s a short distance between the Stirrers’ perspiration-drenched performances and James Brown’s soul workouts—especially when one recalls that Brown and his Famous Flames began as a gospel quartet.

After Cooke left the Stirrers in 1957 to pursue pop stardom, the group no longer had to scramble. It had its pick of replacements. Among the Stirrers’ passing parade of post-Cooke lead singers were Johnny Jones, Johnnie Taylor, James Phelps, Martin Jacox, James Outler, and Willie Rogers. A few even followed the path Cooke paved to pop music. With the exception of Taylor, however, the prodigal singers returned to gospel.

The era when the Soul Stirrers filled city auditoriums to bursting is gone. But make no mistake: every improvisatory shout, every melismatic vocal run, and every extended musical vamp from today’s R&B and rock stars evokes the tradition established more than sixty years ago by R.H. Harris, Paul Foster, Sam Cooke, and the Soul Stirrers. Their induction into the Rock and Roll Hall of Fame wasn’t improbable, it was deserved.

Robert Marovich is the founder and editor-in-chief of the Journal of Gospel Music website, and author of A City Called Heaven: Chicago and the Birth of Gospel Music