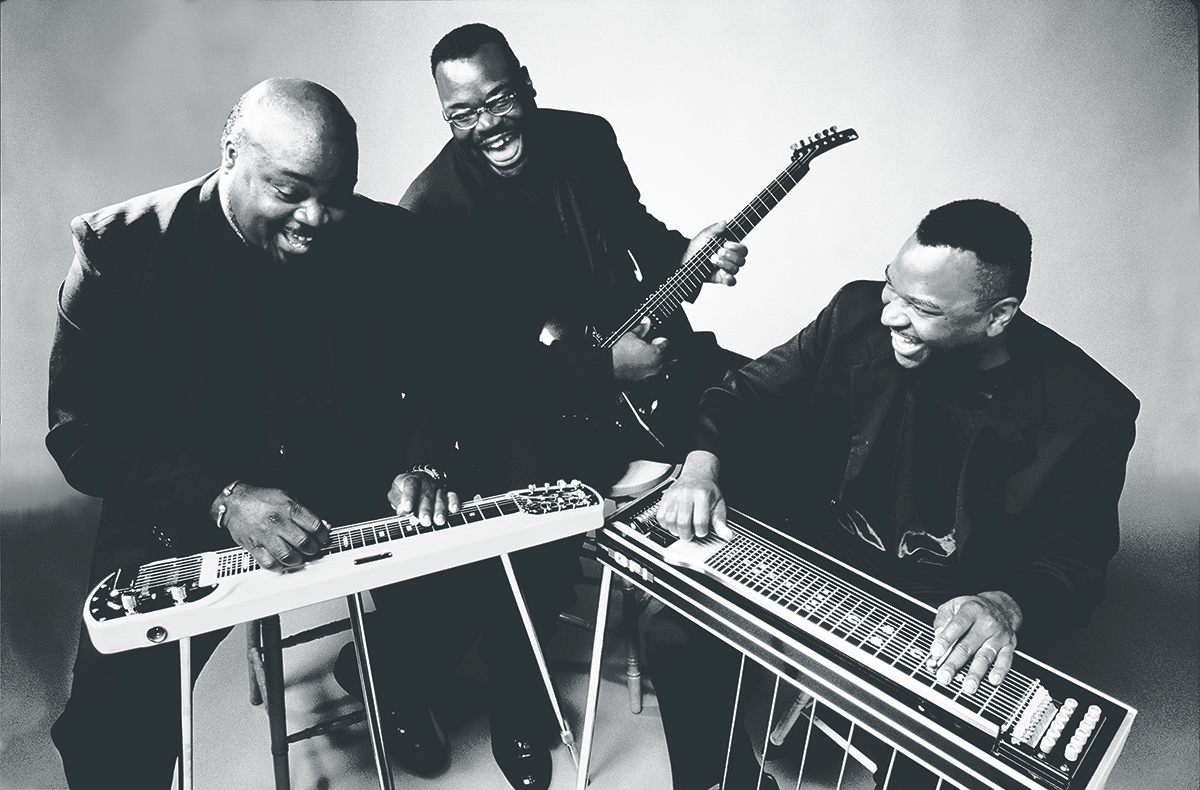 This Saturday evening, June 9th, the Gospel Roots of Rock and Soul present a live performance, a double header featuring The Fairfield Four and The Campbell Brothers. The Fairfield Four will be showcasing their legendary gospel quartet style songs, and complimenting them, the sounds of sacred steel. The Campbell Brothers play music from the African-American Holiness-Pentecostal repertoire with a growling, wailing, shouting, singing and swinging voice of the steel guitar. The Campbell Brothers are comprised of brothers Chuck Campbell (pedal steel guitar), Darick Campbell (lap steel guitar), and Phil Campbell (electric guitar) along with Phil‘s son Carlton on drums and Tiffany Godette rounding out the band with classic gospel vocals. They’ve shared their high energy, rocking gospel sound with both secular and religious audiences alike.

Chuck Campbell began playing the lap steel guitar at the age of 12. At the age of 17 he became one of the first players to utilize the Pedal Steel guitar in the House of God Church. Chuck is renowned for his innovative approach to the instrument both technically and musically. His use of effects such as distortion, and wah-wah pedal and his picking techniques enable him to emulate the human voice in an uncanny fashion, which evokes images of gospel moaning and field singing. Early in his career Chuck became recognized for becoming the first steel player to be accomplished in the Sacred Steel styles of Calvin Cooke, Ted Beard and Henry Nelson. His inventive blending of those methods along with his ground breaking use of complex chords and fast picking formed the musical style which is the most emulated among young Sacred Steel players today.

Phillip Campbell started out as a drummer and quickly proceeded to the bass guitar. It was on the bass that Phil began to explore the many genres which form his eclectic musical personality. As his self-taught explorations took him into bass chord harmonics and figures, Phil began to look at the other instruments which lent themselves to chordal progressions which would express his melodic tastes and further compliment the Sacred Steel playing of his brothers. The guitar became the weapon of choice because of its ability to drive the music. His unique style perfectly complements the Steels across all genres into which they venture.

Chuck’s brother Darick Campbell first made his mark in music as a drummer. For several years Darick was the premier drummer of the General Assembly, the National Convocation of the House Of God Church in Nashville, TN. His choice of the Lap Steel is a reflection of the influences he has blended to become part of the band’s musical power.

Below, listen to and watch a few highlights from the band. The band’s performance will be webcast live via Vuhaus and WXPN in Philadelphia at 9:30 PM ET on Saturday, June 9th. You can watch the performance here.

This article was written for WXPN’S GOSPEL ROOTS OF ROCK AND SOUL.